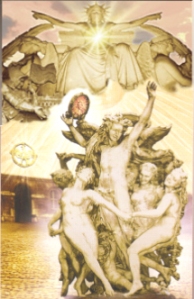 1. Rise and Fall and Resurrection

There’s a secret script behind the whole Überstory of creation and evolution. Here’s what happens, over and over again, on every scale from the highest heaven to the smallest molecules, and of course the human realm. God ~ or whatever manner of yang entity is filling his role ~ woos and wins the Goddess, in the guise of a scintillating yin being of whatever genus. They’re in the bloom of youth, and beget children who populate a paradise in a Golden Age. As time goes on, the once-godly patriarch gets soft and comfortable, and his yang begins to wane. This causes his spouse to get bitchy and bossy, until finally she takes over the turf and rules the roost. Naturally she lets the kids get totally out of hand; they slack off and fuck around until they’re no longer fit to carry the ball to the next generation. Sooner or later the ship hits the sand and the shift comes down: an evolutionary die-off, a twilight of the Gods, a global meltdown, an apocalypse ~ or of equal import on a smaller scale: the annihilation of a tribe by enemies, the demise of a clan, the extinction of a noble lineage, the dissolution of a family. And to the real people caught up in the tragic events, it’s always the end of the world.

But then, halleluyah, there follows resurrection and redemption: by any one of a number of religious or mythic miracles, the Lord regenerates himself. Now he is able to pump new life into his Lady as well; the geyser of fire cracks open the crust of her chrysalis, and she morphs back into her glorious Goddess-form, the embodiment of love and beauty, the vehicle of grace for all her children. Winter blooms into spring, the souls of the dead and the seeds in the earth arise to fresh birth, and a New Aeon begins.

We are now in the time of the Turning of the Aeons, when the desiccated husk of the old order revels in its last hurrah before collapsing into its own scatology. This document is a prospectus for those who wish to pioneer the New Aeon, presenting an effort to regain the high ground in the whole field of sexual love, which is Eros. The first premise is that unloving sex is not Eros, since “Eros” means “love”. It was originally the name of a God, and implies a divine origin for the act of passion. Eros can carry forth its sacred nature in the most passionate acts of love between men and women, who can sacralize themselves by the very act, and by the deep heart-bond it forms between them. This is the true aim of tantra, which is usually lost sight of in its degenerate postmodern forms. We make use of another Eastern term for the special kind of experience and relationship that derives from the heights of Eros: we call it Dharmalove.

Dharmalove is forever beyond the reach of people who live out their lives in the Matrix, and are content with sordid travesties of the act of passion. These humatons have never tasted the reality of true heart-bonded Eros, and most of them never will. Dharmalove may sprout up haphazardly in rare matings of high souls, but we prefer to cultivate it collectively in a spiritual econiche separate from the Matrix. Only in such fertile soil can Dharmalove bear its fruit unto the future.

3. Yang and Yin and North and South