Thérèse’ ecstatic devotion, submission, and obedience to Jesus is identical to the Hindu practice of bhakti described in The Secret of the Gita and exemplified by Radha’s devotion to Krishna. Note the explicit similarity of the two accounts on key points, as when Radha said: “I have given Him everything ~ I am His with which to do whatever He pleases.” And Thérèse echoed: “For a long time now I have not belonged to myself; I have given myself entirely to Jesus. He is free to do with me whatever He likes.” Radha described Krishna as “my loving Husband and Master”; Thérèse likewise addressed Jesus as her Spouse, “the Master and King”. The biggest difference is that Radha is free to acknowledge and fully experience the erotic power of her divine love, while Thérèse was not. 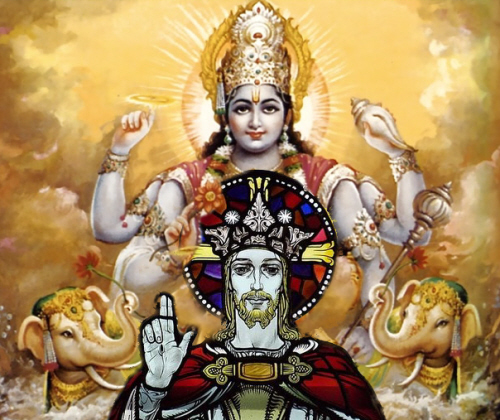 Nevertheless, Thérèse was able to express her bhakti in real life in a way that seems well beyond anything that Radha describes. As a nun, her vow of unconditional obedience to Jesus was exacted through a fiat to her superiors in the order. When she first entered Carmel as a novice, this included everyone she related to ~ she was on the bottom of the hierarchy in the rigorous discipline of convent life. She found this a tremendous challenge due to her exquisitely sensitive, high-strung, willful nature. Fortunately she had been working on it alone beforehand, practicing small “mortifications” suitable to her “little soul”, as she conceived it. Then in the convent, as she wrote: “How I thank God for such a virile and valuable training. Without it I would probably have thought of my superiors merely as human beings, instead of seeing Our Lord in them.”

Some might think it easy to pledge obedience to a divine being with no human imperfections, as lover or otherwise; but this quote is the key to making it real in the physical world, in your relations with other people. Another passage clarifies it: “All is well when one seeks nothing but the Divine Will; that is why the Little Flower [viz. Thérèse] obeys Jesus by trying to please those who hold His place on earth.” This invokes the Catholic doctrine that the power, presence, and authority of Christ flows down from Heaven through the entire hierarchy of the Church, binding the faithful just as if the lowliest deacon were Jesus himself. But what if such hierarchs make faulty decisions, act from impure motives, or abuse their power? On the grand historical scale the answer was the Protestant Reformation, but in the small world of the convent the heart of Thérèse found another way.

Gradually Thérèse became reconciled to the afflictions of obedience and externally-imposed discipline by accepting it as redemptive suffering, as described in her quotes in chapter 13. Now she wrote:

My heart is very sensitive, and because of this I want to offer Jesus every kind of suffering it can bear… to simply do God’s will and to sacrifice myself for Him in any way that will please Him.

Ultimately she took this practice so deeply to heart that she actually came to enjoy what formerly pained her:

God lifts the veil which hides my imperfections, and my Sisters see me as I am, not much to their liking. With a delightful frankness they tell me what they dislike about me. They could hardly be more candid if talking about someone else, because they know that I like them to act like this. Not only does it give me pleasure; it is a delicious feast which fills my soul with joy. How can anything so naturally repugnant fill me with joy? If I had not experienced it, I would not have believed it possible.

She also found new depths of virtue in obedience:

From what troubles we are saved, my God, by the vow of obedience! The simple religious, guided by the will of her Superiors alone, has the joy of being sure she is on the right path.

Does this imply that her superiors are gifted with the wisdom to always know and execute the will of God? Not at all, for the passage continues:

Even when she is sure that her Superiors are mistaken, she need not fear. But the moment she ceases to consult this infallible compass, she goes astray down barren pathways, where the waters of grace soon fail her.

So how is the compass infallible even when the directives are wrong? The answer lies in the miraculous power of human surrender to God ~ the loving devotion that Thérèse offered to Jesus every day of her life. This overrides the ego, and the soul is opened to the outpouring of divine grace, always overflowing but accessible only when we offer ourselves up to it. This is the source of guidance, infallible as long as the soul stays open.

If the Mother Superior and other ranking nuns were surrendered up when they exercised their authority, all their choices would be perfect expressions of the divine will. Of course they usually fell short, but Thérèse knew that as long as she herself was in a state of surrendered devotion to her Lord, he would keep her from any serious harm arising from the faults of others, and that she would dwell securely in his grace forever.

15. Spouse Above, Spouse Below

11 thoughts on “The Story of a Psyche”