15. Spouse Above, Spouse Below

Whatever might be said for or against the postmodern version of Madhurya Bhava, it’s definitely a Spirit-primal fusion ~ a fulfillment of our title theme. A sub-theme stated in the Prelude is to identify the source of the power of the marriage bond, and find new ways to implement it. The primal way is given in chapters two and three: marriages among the ancient Germanic tribes were secured for life by customs rooted in the necessities for survival in a state of nature, and by the male dominion which always prevails among the northern peoples in this state. The power of Spirit is demonstrated historically in the high religions, where matrimony was sacralized and lifetime commitment was fostered by the full force of the religious Zeitgeist that dominated every facet of society. But as we saw in chapter eight, a vital element of this fidelity was repression of the primal sexual instincts by religious doctrine.

Radha in Athens, and Madhuris with whom I’ve spoken personally online, are directly tapped in to a divine Source, a living God attested by literature and tradition as an Avatar of Supernal Spirit. Their intercourse with Krishna delivers them to the heights of physical sexual pleasure, enlivened with the fire of Spirit. This is surely a marvelous fusion, transcending the experiences of primal people and orthodox religious devotees. But still it’s missing a big component: a physical male partner.

In chapter five: Sexual Caste, we clarified the nature of an alpha male and his relationship to various kinds of women. Clearly we see that Krishna is filling the role of an alpha to his Madhuris, even though he’s in numenal form. How would these women respond if their heavenly lover manifested to them in the flesh? One way this might be possible is through a man who practices Sakhi Bhava, mentioned in chapter ten. Many couples actually experience this in tantric relationships, involving many other deities besides Krishna and Radha, and sometimes identifying the divinities simply as their own Higher Selves.

Such Spirit-primal fusions exist today only in the stratospheric top echelon of the subcultures involved, with the vast majority of practitioners and wannabes wallowing in the degenerate tarpits of the brave new age. This is par for the course in the Kali Yuga, but let’s explore how we might extract the gold from the dross and invest it in ways that can illumine many souls and uplift many bodies in a new regenerate culture.

In the last chapter we found a strong convergence between the descriptions by Radha in Athens and Thérèse of their feelings about their relationship with their Godly spouses: I have given him everything ~ I have given myself entirely to him. My loving husband, master, and king is free to do with me whatever he pleases. Now imagine a wife saying this about her incarnate human husband!

We ignore the howls of outrage from the feminoid proponents of gynarchy, and focus instead on the reasonable critical response of white women who value sexual regeneration. Surely even the most loving marriages are an ongoing give-and-take between two people who respect each other as free-willed individuals. Surely such a one-sided fiat would be an invitation for abuse, even by a sincere man with the usual human imperfections. Surely such unconditional devotion should be rendered only unto God.

Our first response is to present a real-life model that has produced many happy marriages, even in modern times ~ though it’s inevitably fraying at the edges in the postmodern fleshpot. We note that Thérèse’ passionate love for Jesus fell short on the primal side of the fusion because it was unrequited sexually, even in her own body and soul. However, this gap has been happily filled by many Christian women, equally devoted to Jesus but not inclined to convent life. They get married to a man they love, and their perfect heavenly spouse manifests to them through the physical presence ~ and erotic ministrations ~ of their earthly husband.

The key to felicity in such matches is that the man surrenders too. He has given himself entirely to Christ as his Lord and Master, who holds him responsible for the welfare of his wife and children. Nevertheless, it’s the traditional marriage vow, not the postmodern version where both partners are held to have same-and-equal status and obligations. Instead, Christ the Lord bestows his fiat of Mastership upon the man, and the woman pledges obedience and devotion to Jesus through him.

If a man is worthy of this divine fiat, and remains steadfast in his troth (marriage vow), there will never be abuse. An objection may still be raised that the kind of unconditional submission expressed in the Radha-Thérèse quote would force the wife to tolerate a lot of fallout from her husband’s failings, errors, and the inevitable negative quirks of the psyche. In fact many devout couples are perfectly happy with a more conditioned version of the pledge, but even should a woman embrace the total bhakti, the objection is answered by Thérèse. She accepted all the negative fallout of her obedience and surrender as a sacrificial offering to her Lord. Gradually it became delightful and even ecstatic as her bhakti deepened. The afflictions she joyfully suffered suffered at the hands of her fellow nuns were precisely the stuff that fuels endless human argument and conflict, especially in intimate relationships, giving rise to feelings of injustice, unfairness, insult, and emotional abuse.

All these reactions spring of course from the ego. In the Bhagavad Gita Krishna teaches that transcendence of the ego eliminates them ~ all the instinctive revulsions to hurtful actions by others. The problem is that this is an extremely advanced spiritual state, attained by few. The solution is bhakti: spiritual surrender and devotion, as told in The Secret of the Gita. Thérèse was living proof of what might seem like a far out metaphysical proposition: bhakti turns all the woes of life into joy and happiness, even while we still labor along with our egotistic luggage.

The idea of a woman loving her husband as a God may also seem far-fetched to many people. A larger context is the New Age usage of the Sanskrit greeting “Namaste”, meaning “I honor the God in you”. The aim of tantra is specifically for the couple to fully experience themselves as God and Goddess in the love-making trance. The same is true of the variation practiced in sex magic, except there the divinities usually assume more of a demonic aspect. And besides all these esoteric versions, we find a primal validation of the reality among the ancient Germans, in chapter 2. Tacitus said that a woman loves her spouse “not only as her husband but as the God of marriage.”

So here is a model for white marriage in the new millennium, fulfilling the best traditions of both the Western and Eastern branches of the race. Supernal Spirit, which may be embodied in a White God, bestows the divine fiat on the couple. This is accessed by the groom through his selfless surrender and devotion to God, and by the bride through her selfless surrender and devotion to her man, and to God through him. Till death do they part ~ and perhaps even death shall have no dominion over such a match! 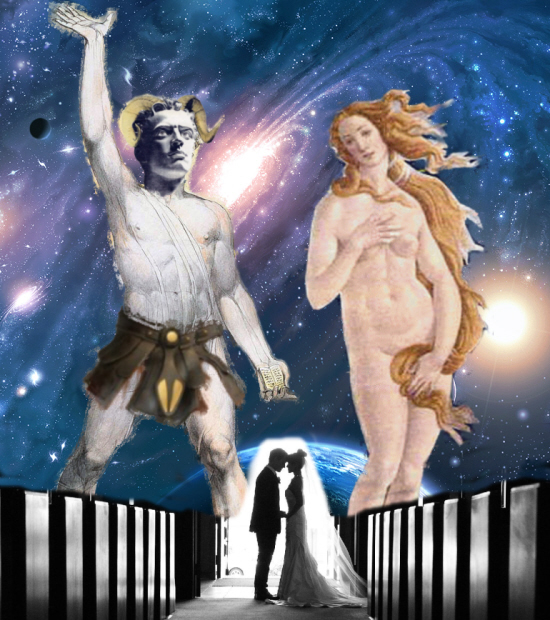 8 thoughts on “Spouse Above, Spouse Below”